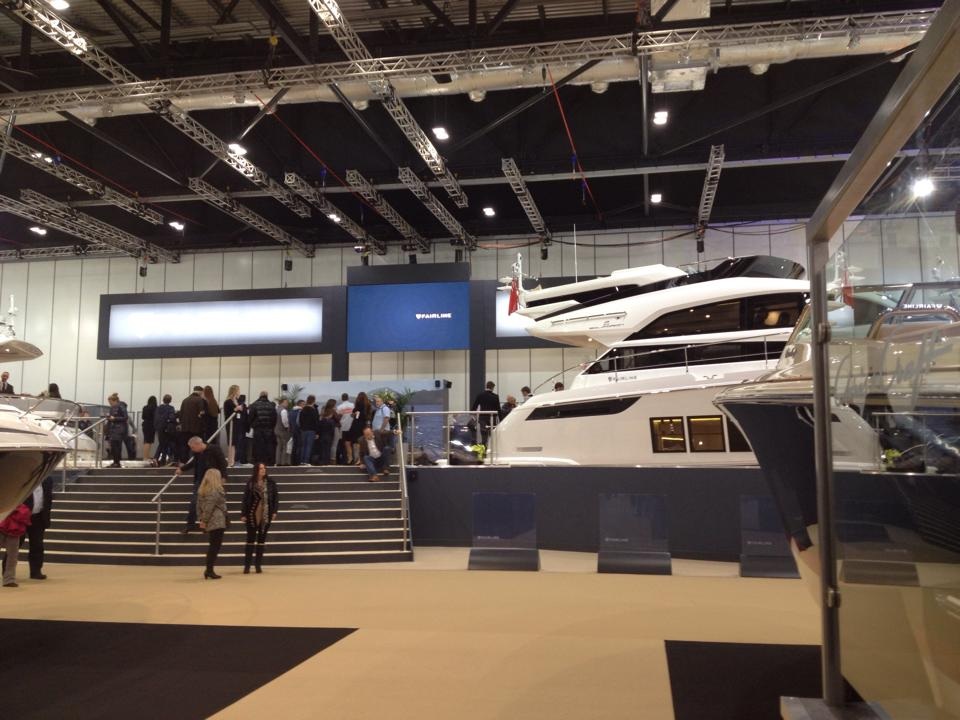 LONDON BOAT SHOW 2014
Onyx provided a bespoke solution for the presentation of the latest boats, technology and products at the London Boat Show 2014. Held at Excel London from the 4th to the 12th January the show featured hundreds of boats including over 75 debuts of sailing and power boats. RIBS, motor yachts, dinghies, canoes, kayaks and Inland Boats were all on display on designated stands and out on the marina with nine invited boats appearing as the show’s ‘Feature Boats’. The featured boats are selected for their historical interest, popularity or for winning many races and awards and the Onyx team ensured they were presented with maximum visual impact throughout the nine day event.

HAPPY NEW YEAR!
The Onyx team wish you a bright and prosperous 2014!
HARRODS
“There Is Only One Sale”: Onyx supplied its all weather outdoor display screen for the annual Harrods Sale on Boxing Day. With its bright LED display, the screen entertained Londoners and included a live video stream of the crowd as they waited for the doors of the famous department store to open.
WESTMINSTER MEETING
Known across the events industry for consistently providing Rock Solid Support, Onyx was chosen as equipment supplier for a major corporate meeting held in Westminster this November. Onyx supplied all the set and staging, prompting, laptops, plasma screens and lecterns for the meeting, ensuring the speakers’ content was presented in a way that maximised audience retention. Onyx also created a custom main screen video and projection display to further enhance the event.
CHRISTMAS PARTIES
Onyx is preparing audio, lighting and video equipment ready for the busy Christmas season. The LED trailers, plasmas and video walls are also proving a popular way to showcase Christmas images at parties and conventions across the UK and Europe this year.
LONDON BRIDGE
ONYX was asked to create a bespoke event solution for the set and staging requirements of an international convention held on the banks of the River Thames this November. Onyx also supplied the latest sound technology for the event, including speakers and microphones.
INTERNATIONAL EXHIBITION
All the equipment required for an international exhibition in Amsterdam was designed, installed and supplied by ONYX this autumn. The ONYX team designed a bespoke solution for the event, supplying sound systems for two lounge areas, microphones, LED lighting, laptops and LED screens. ONYX also provided the staging and specific stage effects, ensuring ONYX exceeded expectations for every part of the client’s brief.
ADVERTISING CAMPAIGN
Onyx supplied LED screens for the windows of a major London department store as part of the launch of Blackberry’s new Z30 smartphone this October. The promotional display included a film highlighting the exciting new features that Blackberry are introducing with the launch of the phone. The larger display screen, higher pixel resolution, fast browsing, strong connectivity and smooth navigation were all promoted as part of the campaign, celebrating the very latest in Blackberry technology. The ONYX LED screens proved the perfect solution for advertising the latest technology, continuously encouraging shoppers to enter the store and view the new smartphone.
WORLD TRIATHLON
World Triathlon Grand Final was held in Hyde Park on the 15th September and the crowds enjoyed continuous live coverage of the competition thanks to ONYX’s new trailer screens. The event has a huge legacy from the 2012 Olympic Games, which sought to inspire world class sporting performances for future generations. London hosted the 2013 triathlon using an identical course and venue as that used in the 2012 Olympic Games. Situated next to the finish line in Hyde Park the screens were visible during the BBC’s three hour coverage of the World Series, helping to revive the spirit of last year’s Olympics. 5,000 athletes from all over the globe competed for world championship titles, with Spain’s Javier Gomez winning the gold and the UK’s Jonathan Bowles winning the silver medal in the men’s race. In the women’s race the Women’s Elite World Triathlon Title was won by Welshwoman Non Stanford, the first woman to win the under-23 and senior world titles in successive seasons!
GOODWOOD REVIVAL
Plasma screens and sound equipment were provided by Onyx for the three day Goodwood Revival event this September. Celebrating the history and popularity of the Goodwood Circuit from 1948-1966, it is one of the world’s most popular motor race meetings and the only UK event to recreate the golden era of motor sport. 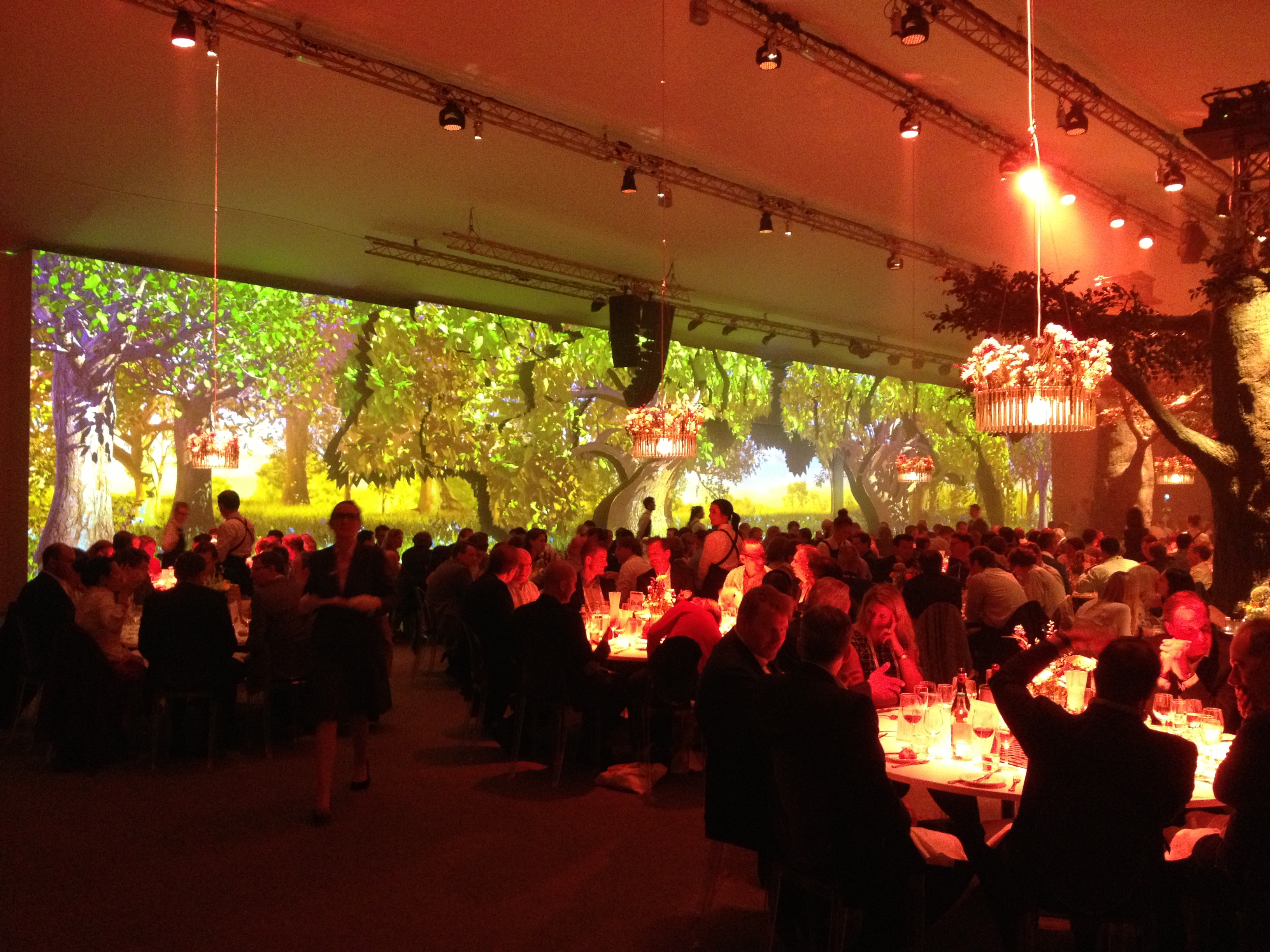 SUMMER PROJECTION
As a result of the technical expertise provided by the team at Onyx, a major corporation selected Onyx equipment to transform their venue for a gala dinner using the new PT-DZ21K projectors. The corporation’s woodland theme, featuring trees as the centre pieces in the room, was enhanced with the Panasonic’s vivid image projection guaranteeing the chosen forest scene was visible for every guest by projecting the stunning imagery across the width of the venue’s main wall. At several intervals during the event the ONYX team changed the colour of the projected trees image and also made it interactive for the event’s performers, further enhancing the stunning effect! 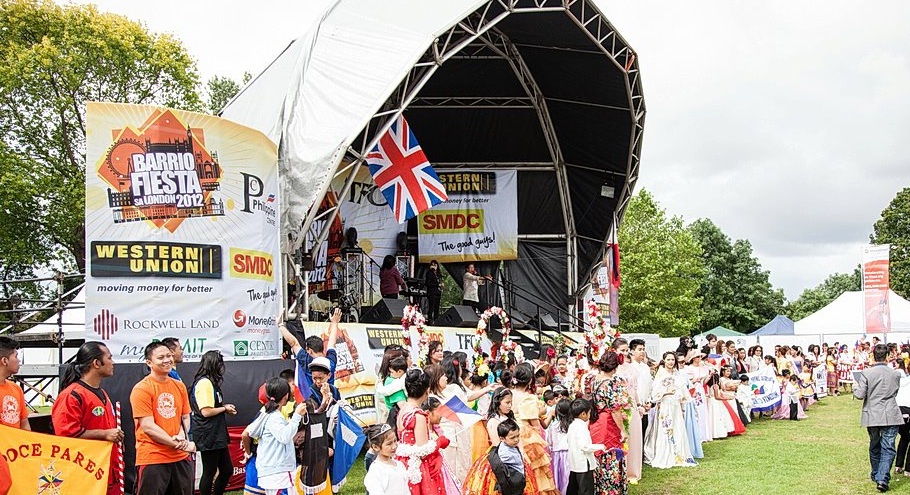 BARRIO FIESTA
Onyx supplied the screens for the 29th Philippine Centre Barrio Fiesta sa London on the 20th and 21st July. Held at its new location of Apps Court Farm in Walton on Thames, the two day free event is open to the public and aims to unite the individuality of the Philippine’s in a spectacular annual fiesta. Featuring the best of Filipino cultural performers, food and products, the fiesta also included the European grand finals of a talent contest organized by The Filipino Channel. 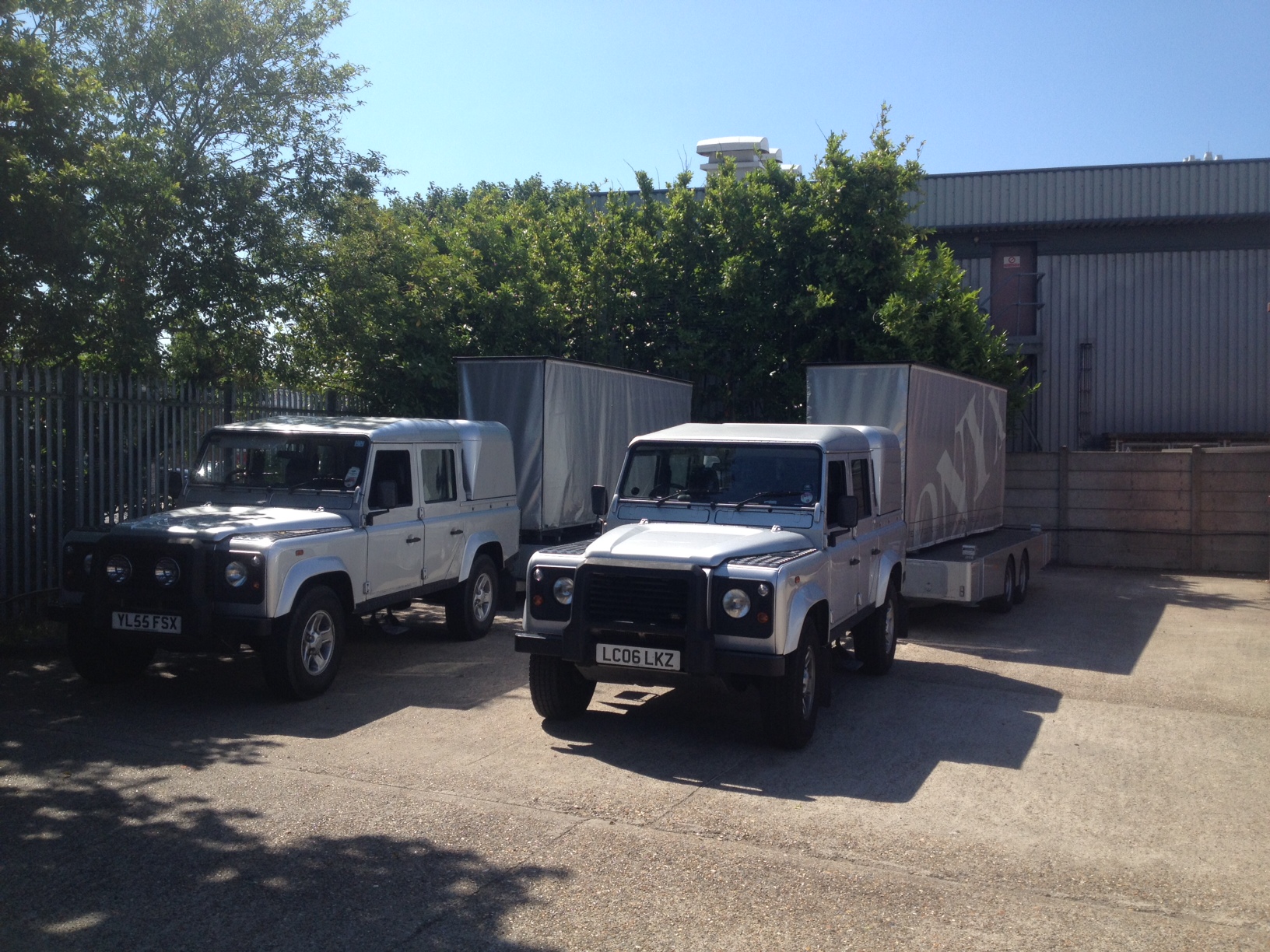 Trailer Screens
Trailer screens have proved the perfect solution for event producers throughout the 2013 summer providing a really effective way of showcasing events, parties and festivals.The Onyx all weather outdoor display screen can be used anywhere at any time come rain or shine. With its bright LED screen, which can be used day or night, this really is an impressive way to promote your event to maximum effect. The screen can be rotated to 360° to increase the viewing coverage to the greatest effect.The screen can be towed to site by one of our engineers and installed ready to go within 1 hour. It is self-contained with its own onboard generator with a 10 hour run time per day.The screen comes complete with its own video playback equipment, Freeview receiver and a sound system.
FESTIVAL OF SPEED
Onyx supplied equipment for several of the world’s biggest car brands at the 2013 Goodwood Festival of Speed, displaying the vehicles to visitors with maximum visual impact. The annual event, held in the grounds of Goodwood House, is based around the famous hill climb and features motorbikes and cars from over 100 years of worldwide motor racing history. Founded in 1993 by Lord March, the Goodwood Festival of Speed is so popular attendance is now capped at 185,000. This year’s festival included the Soapbox Racers, Michelin Supercar Run, the Goodwood Aviation Exhibition and a display by 15 motorcycle world champions, all selected to reflect the 2013 theme of Goodwood to Celebrate the Best of the First 20 Years of the Festival of Speed. 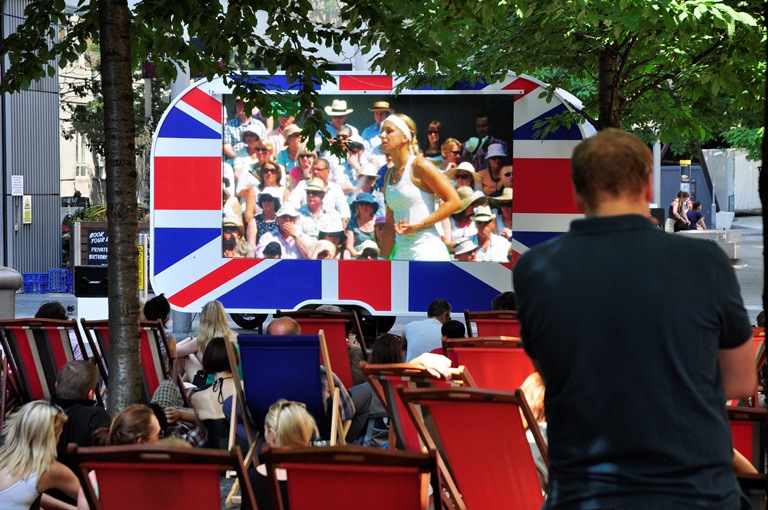 GREAT BRITISH SUMMER
The Great British Summer event returns this weekend with free outdoor screenings of the Wimbledon 2013 Championship. The competition, the oldest in the world of its kind, began in 1877 and remains the most prestigious tournament for fans and players alike. 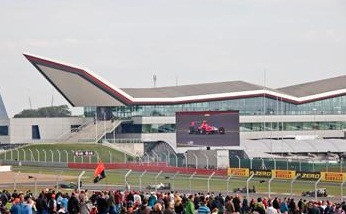 FORMULA ONE
Onyx assisted with the supply of the screens for the 2013 Formula 1 Santander British Grand Prix, ensuring the crowds missed none of the action during the 306.747km race. The Silverstone circuit, where the British Grand Prix has been held since 1987, has 12 corners and 13 locations where screens were visible to the motorsport fans, displaying each of the 52 laps to maximum impact. 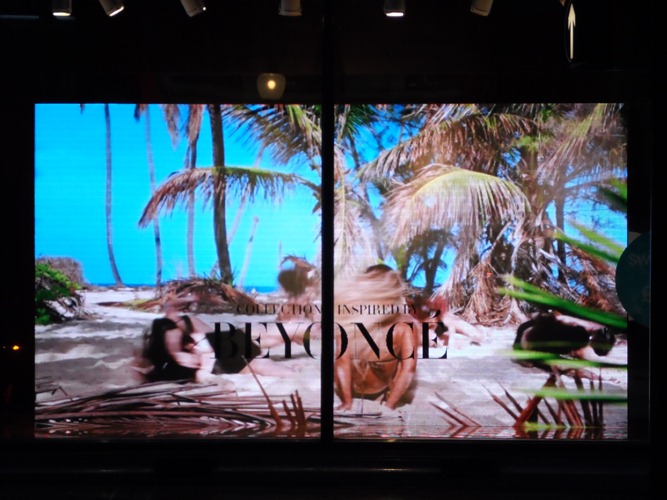 BEYONCE COLLECTION
Onyx assisted with the supply of LED modular screens for the windows of a leading global fashion retailer as part of a key European campaign. With screens in the London, Nice, Bordeaux, Stockholm and Warsaw stores the window display featured the latest film with global superstar Beyonce. Located in London’s Regent Street, the screens showed Beyoncé’s latest advertisement continuously, generating great interest around the store’s windows. The two minute film, directed by Jonas Åkerlund, promotes Beyoncé’s Summer 2013 Collection and was produced in the style of a music video on a beautiful beach in the Bahamas. Beyoncé modelled key pieces from the new collection in the film, including swimwear and the latest summer styles, displayed to great effect using the latest LED screen technology.
BRIGHTON MARATHON
Onyx screens captured all the action at the 2013 Brighton Marathon, displaying Twitter support messages for the competitors as they raced to the finish line.
DAVID BECKHAM
Onyx supplied screens for the windows of a leading global fashion retailer’s stores in Oxford Street, Oxford Circus and Regent Street showing David Beckham’s latest advertisement continuously for two weeks. The two minute film, directed by Guy Ritchie, promotes David Beckham’s Spring Summer 2013 Bodywear Collection for the retailer. It features David Beckham in boxers and slippers chasing a Range Rover in which his dressing gown is trapped around the homes and streets of Los Angeles and even highlights ten seconds of his footballing skills! 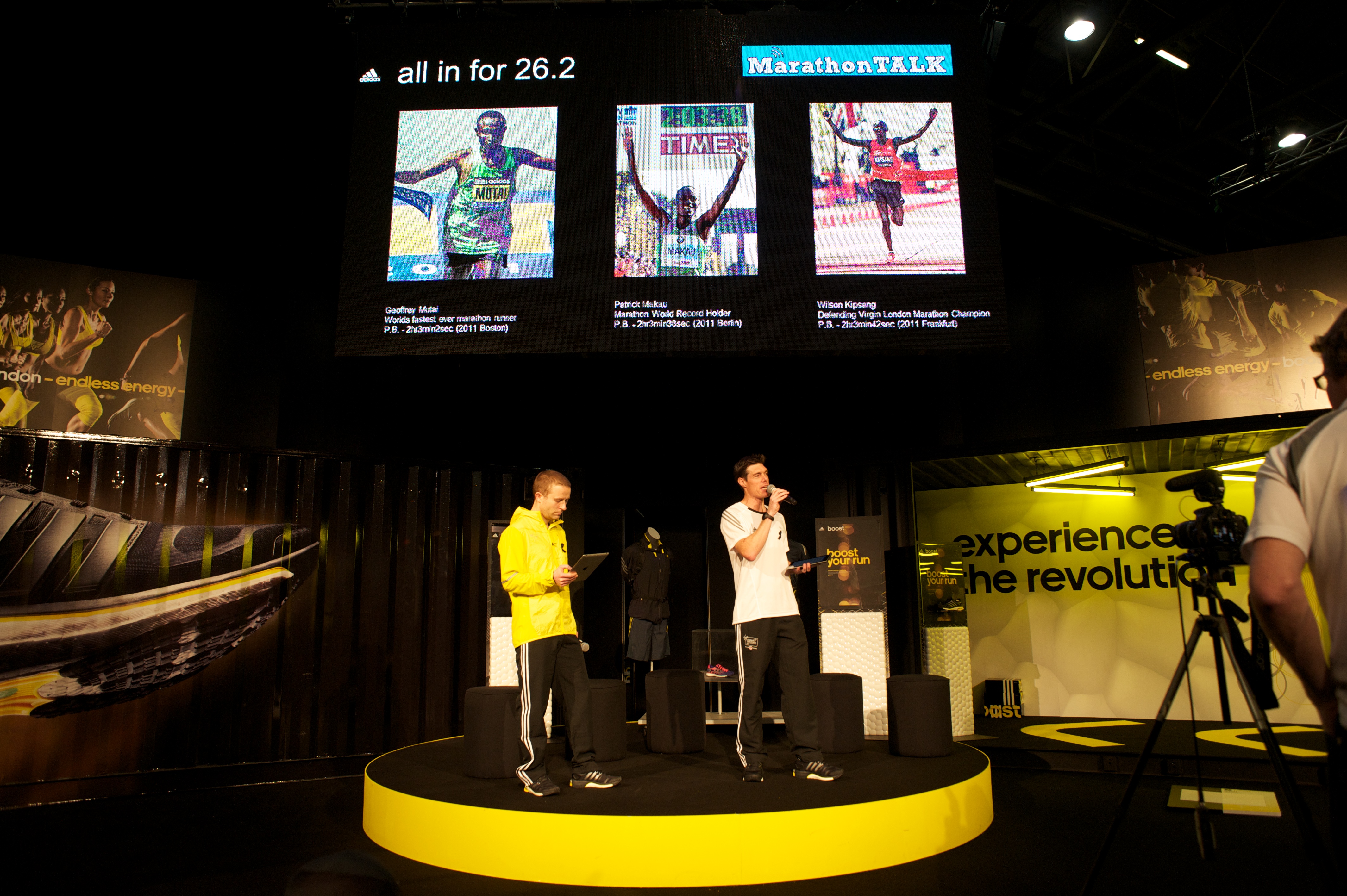 LONDON MARATHON
Onyx supplied the 9m wide Twitter wall displaying up to date good luck messages, the main stage presentation area and a 5m x 3m main LED screen for Adidas at the 2013 Virgin London Marathon Expo. The event, held at London’s ExCeL Exhibition Centre from Wednesday 17th to Saturday 20th April, featured a redesign for Adidas and the launch of their new footwear Boost Range. The event was attended by 70,000 visitors over the four days celebrating the 34,631 runners participating in the 26.2 mile race.